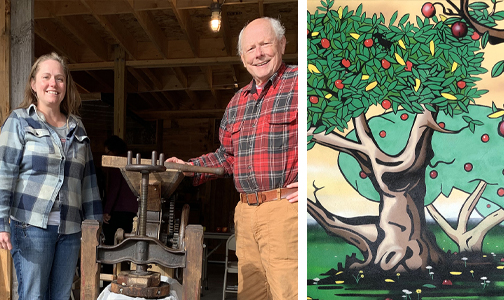 They say lightning never strikes twice. Not true! Seen it. Touched it.

Let me take you there.

First, let’s go back about a hundred years. Mr. Webb Braswell farmed a parcel over in Montezuma, between Newland and Linville, NC. He kept bees, cows and a pig. And he planted apple trees. Everybody did. Braswell’s orchard included a popular apple called the “York,” a tart apple often made into sauce or cider, and also a tree of uncertain pedigree that produces sweet, yellow fruit for eating out of the hand.

“When Mr. Braswell died none of his heirs were interested in working the farm, and eventually my father bought it, in the 1960s—he loved this farm, and after he retired, this is where he wanted to be.” So says Billy Trott, who has succeeded his father as orchardist. “We’re restoring the farm now, in his memory.” The restoration includes reviving the orchard by nurturing the established trees, some of them now a hundred years old, and by planting new trees and new varieties. “We saw that cider is making a comeback, and with a market for cider apples, the idea is for the new orchard to produce an income to help sustain the farm.”

Now let’s step back again, about fifty years, and witness a minor miracle. An apple falls to the ground. From this apple, one of so many, a seed finds the soil. Escaping ants, mold, mice, all the things that might destroy it, the seed puts down a root. A seedling rises up and, escaping the deer, and the mower, and all the things that will destroy a seedling, it becomes an apple tree.

“We’d started clearing trees and brush up on the hill, and we could see that it had been farmed,” says Elizabeth Trott, who is Billy Trott’s partner in this project and also his daughter. “There were old fences and piles of rocks from walls, and one of the men who was helping said he had found some old apple trees, and ‘did we want to save them?’ I said, Yes.”

But there was a problem, not a big one, just the nagging sort. “The trees are too close together, and my father wanted the trees to be all spaced out and lined up, to get the best yield,” Elizabeth explains. “We could see that the middle one is a seedling tree, so he wanted to take it out, but I just can’t cut down an apple tree. I said, ‘Why don’t we wait and see?’ And there was so much other work to do, we just moved on, but every now and then he’d bring up the tree—I just kept saying, ‘let’s wait and see.’”

Elizabeth lives at the Montezuma farm these days. “I always knew I wanted to live in these mountains. I enjoyed being in Chapel Hill, for school, but I always knew I’d live in the mountains.” In addition to being orchardist-in-residence, she is a Naturalist on the staff at the Grandfather Mountain attraction and an EMT with the Linville Central Volunteer Rescue Squad. I asked whether the apples had influenced her decisions. “I had been driving up every week for years, and when we started restoring the orchard I just came to love it more and more. So, yes, the apples were a draw… I studied history in college, and then horticulture in community college; there’s so much history in apples, so much written about them… there are my two interests coming together—the history of apples is just romantic!”

Let’s step back one last time, just a couple of years. For a major miracle. Clearing had been completed. That seedling tree, stunted, bent, too close to its neighbors, out of line, a middle tree, had for the first time in its life, perhaps, enjoyed full sun. It responded by producing apples.  What’s more, it produced an apple for Doug Hundley.

Doug was the NC Cooperative Extension Service agent in this area, and he is celebrated in the region for his work supporting apple orchards and orchardists. For example, in Crossnore he has created a small orchard of heirloom apple trees where you can see the trees, learn about them, and even eat the apples. You can also see and learn about the grafting of apple trees (more on that below). Anyway, Doug was visiting the Trott orchard and, seeing fruit on a seedling tree, he sampled it. “He said it was pretty good,” recounts Elizabeth, “that it would be a good cider apple.” A miracle. A major miracle. Right then and there.

Here’s why. When you’re holding that delicious Pink Lady apple in your hand, you’re actually holding two very different things. The flesh of that apple is the product of the tree, and every season that tree produces Pink Lady apples. The seeds in that apple, however, are hybrids of that tree and some other apple tree. A seed from the Pink Lady apple will not produce a Pink Lady tree, but a hybrid, a “seedling tree.” The problem is, hybrid trees rarely produce delicious apples.  Mother Nature doesn’t care what apples taste like. And neither do the bears. Only people care what the apples taste like, and we are picky. Only one in a thousand, one in ten thousand, maybe one in a million “seedling trees” will produce a fruit that people really enjoy. Those other 999,999 seedling trees produce fruit called “spitters,” and that’s just what it sounds like.

When that one seed five decades ago sprouted and against long odds became an apple tree, that was a stroke of lightning. When, against impossible odds, Doug Hundley tasted the fruit and found that it was good, well, there it is again. Lightning. Right here in Avery County.

Not long after, Tim and Kate Arscott were in the neighborhood and Elizabeth invited them to drop by. The Arscotts make cider, which they bottle under the “Molley Chomper” label and also serve on tap at their excellent pub in Lansing, NC. They, too, found that the apples from that particular tree are good, and suggested that they would want them for cider.

Well, now it’s serious. Doug recommended that the tree be pruned, with a chainsaw. “It was terrifying,” says Billy. “I thought, My tree!” Elizabeth adds, “They did cut a lot off the top. It looked kind of small, after.” But pruning did the trick. The tree responded by producing lush new growth. From this new growth, Doug took fresh green shoots to graft onto existing apple root stock. As we know, the seeds from the tree won’t produce more of the same tree. But by taking cuttings from the tree itself, you can reproduce it, over and over again. By now there are about two dozen young trees, all of which will produce good apples, waiting to be transplanted in the Trott orchard.

Billy has since confirmed, using DNA testing, that his tree is indeed a “seedling tree” not previously known to exist. And that it is likely a hybrid of that York tree and the yellow apple tree from the original Braswell orchard. Since it’s on his farm, Billy has naming rights. “We had been calling it just the “Middle Mystery Seedling,” but when it came time to have a real name, I decided to call it the Hundley Montezuma, in honor of our good friend and this good place.” 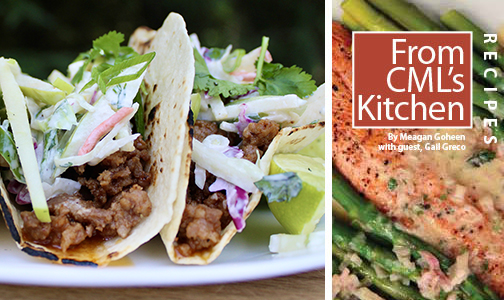 From the CML Kitchen