The Show Must Go On(line)

Just as our spring issue was going to print in mid-March, my cellphone blew up with news of public closures, stay-at-home orders, and mandatory quarantines. I was literally walking through Times Square on the way to a Broadway show on Thursday, March 12 when the scrolling electronic headlines announced the news that all NYC theatres were closing for at least a month.

All 53 events that were listed in our spring cultural calendar and summer arts preview—the largest number of shows we’ve ever featured—have now been cancelled, postponed, or rescheduled. Since then, the local, state, and recent national statistics have been sobering for an entertainment industry that accounts for $877 billion per year, or 4.5 percent of our nation’s annual GDP.

While 40 million Americans (one in four workers) have filed for unemployment since mid- March, the leisure and hospitality industry has been hurt far more than any other sector of our economy with a nearly 50 percent unemployment rate. In February, nearly 17 million Americans worked in that super sector, which comprises the arts, entertainment, and recreation industries, but by the end of April that number had fallen to just 8.7 million.

The Broadway League projects that live performances may not resume on “the Great White Way” until sometime in 2021. Guthrie Theatre Artistic Director Joseph Haj reminds us, “The very premise of theatre is gathering people together in a shared space to enjoy a shared experience,” but in North Carolina and bordering states, the return to live theatre is only permitted in the last phase of reopening plans.

Still, arts advocate Howard Sherman says, “Theatre people are proving to be the silver lining in a very dark cloud.” Here in the High Country and throughout our region, our beloved local companies and performers are stepping up and finding ways to keep connecting with audiences, as new work emerges and adapts during the COVID-19 crisis.

And it didn’t take long. In the Department of Theatre and Dance at Appalachian State University, the cast of “Spring Awakening” said upon hearing of its cancellation, “We were dramatically devastated when we first heard the news, and many of us couldn’t wrap our heads around it… (but) decided not to let this experience go to waste.”

They put together a video of themselves singing “The Song of Purple Summer” that was posted on social media in early April, was subsequently picked up nationally by the online site Broadway World, and quickly went viral. Since then, hundreds of students and casts have done the same, but this was one of the first. Appalachian alumnus and Tony-nominated lighting designer Annie Wiegand saw the video and sent a message to the Class of 2020 reminding them that, “After a plague comes a Renaissance!”

At the American Shakespeare Center (ASC) in Staunton, Virginia (profiled in our Winter 2015 issue), Artistic Director Ethan McSweeny observed early on that live theatre was in trouble by looking at their national touring company. “All our bookings at universities and clubs started canceling,” he said in an interview with the Theatre Development Fund. But, instead of panicking, he began planning. Figuring it was just a matter of time before ASC’s 300-seat Blackfriars Playhouse in the Shenandoah Valley would be forced to shutter, he decided to film all current or in-rehearsal productions. While other regional theatres got one, maybe two shows in the can before the pandemic hit, ASC shot seven, which have been streamed online in a pay-per-view format. The Washington Post reported that it was the most fresh and largest amount of new content being provided by any theatre in the country. McSweeney said, “It definitely isn’t replacing our business, but it’s turned out to be an absolutely vital point of connection.”

Barter Theatre’s Katy Brown, in her first few months as Producing Artistic Director, has made similar strides with their “Inside Barter Series” of virtual conversations with beloved company members talking about Barter productions past, present, and future. Their Barter Players’ productions of “Aesop’s Fables” and “Peter Pan” have been available online and, most notably, Barter Theatre brought a free presentation of a Shakespearean play to the homes of almost 3,000 students during the coronavirus shutdown.

For this project, Brown drew on the tenacity and ingenuity of the Barter’s founders and developed a solution: “Macbeth: From Our Homes to Yours.” Director Carrie Smith Lewis worked tirelessly with Barter’s resident videographer Garrett Houston to adapt the production so it could be recorded from the actors’ homes. They produced it in a way that not only told the story, but also created a mystical world far beyond that of a video conference.

While Barter, the State Theatre of Virginia, waits to resume their delayed 2020 season, Brown is investigating the safest options imaginable to restore the impact of live performance for their patrons, such as producing theatre for young audiences in at outdoor venue. Details will soon be announced via their website.

Meanwhile, there is some good news to report. “The Stage,” a weekly arts publication out of London, reports that “online theatre audiences are booming during the lockdown,” with “one in five of those accessing digital arts content doing so for the first time.”

No company has taken this hopeful trend to heart better than An Appalachian Summer Festival in Boone, who replaced their entire 36th Season with an online-only programming schedule of 31 livestreamed and specially recorded music, dance, theatre, film, and visual arts events from July 1-31, 2020. All events are free and can be accessed by a variety of channels: appsummer.org, Facebook, Instagram, and YouTube. Details of each event and distribution format are available at appsummer.org. Film screenings require pre-registration, as online audience size is restricted. Full descriptions about each event and how to access them are available at www.appsummer.org.

“During this challenging time for arts presenting, we’ve been amazed by the resilience and innovative spirit of artists who are committed to finding new avenues for sharing their work,” notes Denise Ringler, Director of Arts Engagement & Cultural Resources at Appalachian State University. “We’re excited about the opportunity to connect these artists with the festival audience, while inviting thousands of online arts lovers to learn about App Summer and the Turchin Center, and to become engaged in our programs this summer, and in future seasons.”

On Saturday, June 20, the Appalachian Theatre of the High Country (ATHC) will produce “Re-Energize Watauga: LIVE from the Appalachian Theatre!”This virtual event involves performances by prominent regional artists on the Doc Watson Stage for Americana Music to benefit the Re-Energize Watauga Fund. This fund exists to provide a rapid source of financial assistance for our Watauga County-based businesses that have been negatively affected by COVID-19. The low interest loans can provide small businesses with capital to meet the most pressing needs and successfully navigate around the pandemic. The event will be live-streamed from the Appalachian Theatre via local access cable, a dedicated YouTube channel, Facebook Live, etc.

ATHC will soon announce events taking place as part of the Southern Circuit Tour of Independent Filmmakers, a curated series of new documentary and narrative films that will tour to 24 screening partner venues spanning eight states, including the Appalachian Theatre. This program connects documentary filmmakers and their impactful work with audiences throughout the South and each screening includes an opportunity for the theatregoers to participate in a Q&A with the filmmaker to share their process and engage with the audience. “As filmmakers, we want our films to reach as broad and diverse an audience as possible,” said Pam Tom, director of the film “Tyrus.” “The Southern Circuit Tour makes that happen.”

Beanstalk Community Theatre has launched a Facebook series titled, “Quarantine in Oz, Y’all,” a five episode story they are sharing with their fans since their summer musical was rescheduled for 2021. They also have a “Pass the… Video” event in the works before live streaming a table reading of a new soap opera written by Shane Lee Miller.

While postponing their season to 2021, Trimella Chaney of the Blue Ridge Community Theatre reports that they have launched a new feature on their Facebook page featuring memories from former productions including interviews from the original participants.

Ensemble Stage in Banner Elk has set up a YouTube account and is posting some clips from their video archives along with episodes from their popular staged radio plays, sprinkled in with fun tidbits and trivia about the shows, scripts, and authors. Their radio version of “A Christmas Carol” is now online and broken into five to eleven minute episodes. Founding Artistic Director Gary Smith says they are still holding out hope to get at least part of their summer mainstage season into production, and are still planning on a summer theatre camp for kids and some type of performances that follow the current social distancing guidelines for both performers and the audience.

In/Visible Theatre intends to produce its annual Boone Solo Festival (BOLO Fest) late this summer, with a provision for going online if need be, according to founders Derek Davidson and Karen Sabo.

In lieu of our usual cultural calendar, the following is a listing of organizations whose artistry we cover in the pages of CML. The asterisk indicates those groups who are still planning to program cultural offerings this summer; please check them out online at the following websites:

Horn In The West | HornInTheWest.com

Postscript: We leave you with these words of wisdom from my colleague Molly Smith, artistic director of Arena Stage in Washington, D.C., as a hopeful mantra: “It’s a time of introspection. Theater is an important weapon against hate, misconceptions, and prejudice; it is also a tool for understanding, compassion, and thoughtfulness.” Amen. 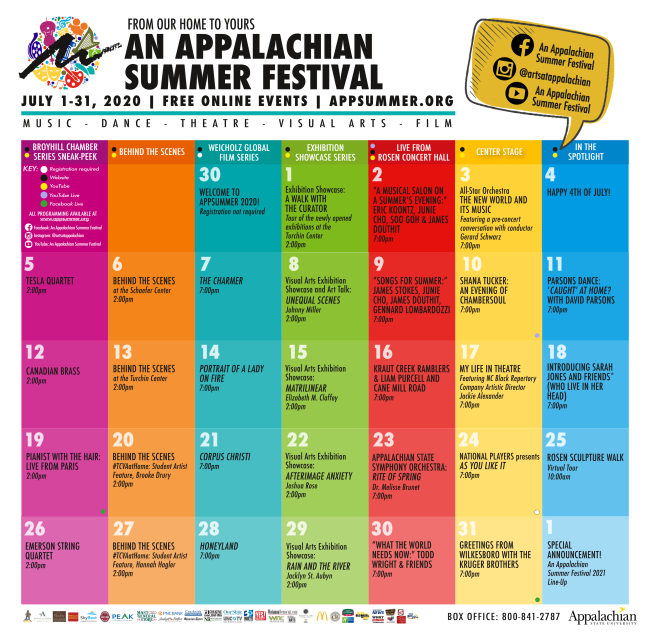