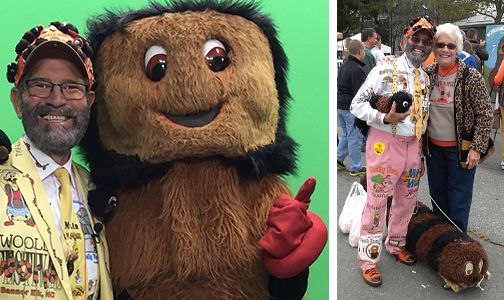 The Man, the Myth, the Legend: Roy Krege

With the Woolly Worm Festival season upon us, it seems like the perfect time to revisit the legacy of Mr. Woolly Worm, Roy Krege. Over the years, Roy’s other titles have included Mr. Banner Elk, Mr. Avery County, Mr. Lees-McRae, Friend, Husband, Dad, and Pop!

It is not an exaggeration to say that Roy has become world-famous as Mr. Woolly Worm.  Dressed in his signature outfit, Roy’s smiling face has been beamed across the globe. As Lees-McRae’s President, Lee King, once said, “Roy is the only guy I know who can rock a pair of pink pants, an orange shirt, a yellow tie, and a yellow blazer covered with woolly worms and somehow make it all look good!” Roy’s dedication to making sure everyone who attends the Woolly Worm Festival has a great time is legendary. Who else would be able to convince a child (or grown-up) that racing a woolly worm up a string is one of life’s great opportunities? Even when a worm lost its race, its owner would be consoled by Roy and encouraged to hold out hope for next year. Adam Binder, now serving as Mr. Woolly Worm II, tells of going into a restaurant in Hickory, NC, with Roy and hearing, “Oh, man, that is Mr. Woolly Worm!” He also shared that Roy, wearing his hat and suit, took more photos with fans at a minor-league baseball game than did the team’s mascot. Roy spreads happiness wherever he goes!

Regardless of what title Roy might hold or which hat he might wear, his commitment to making a difference in the lives of others has been his life’s work and is his legacy. As noted by many who know him, Roy was a servant-leader long before the term was coined. In every position he’s held and in every organization he’s served, Roy has put others first.

Roy’s life of service began as a child with the influence of his family and his faith guiding him. His family moved from New York to Florida when he was a young boy.    By the time he and his wife, Marion, were married and became fixtures at Carson-Newman College in Tennessee, the foundation for their life together was set. It was at Carson-Newman that their paths crossed with Dr. H.C. Evans, Jr. Dr. Evans taught both of them in classes and included them for several summers as staff at Buck Hill Falls Camp in Pennsylvania.

Not long after Dr. H.C. Evans became President of Lees-McRae College (LMC), he brought Roy on board. In talking about Roy’s service, long-time friend and colleague Jim Stonesifer said that Roy went above and beyond the call of duty and mastered every job he was given. From starting summer programs at the college to bringing it into the computer age, there was no task too daunting. Roy and Stonesifer were instrumental in helping LMC transition to a four-year college. When Reverend Edgar Tufts founded the college, his vision was for it to be “In the Mountains, Of the Mountains, For the Mountains.” Roy upheld that vision in every way.

His life’s work would not have been possible without the support and involvement of Marion and his children, Kim, Dewayne and Michelle. With the hours Roy put in, it is a good thing that Marion and the kids liked to be involved in LMC life on so many levels! This same commitment has swept up a new generation of the six Krege grandchildren.

After 26 years at Lees-McRae, Roy’s journey took him to Grandfather Home for Children. While there, Roy created one of the state’s first charter schools and served as its first principal. Jim Swinkola, retired CEO of Grandfather Home, said Roy’s job was to love and care for the children there, to educate them and to help them know God’s love.

Roy’s service to others extended far beyond the boundaries of Lees-McRae and Grandfather Home for Children. His servant-leadership was put into practice across the High Country. It would be difficult to find an organization, chamber or tourism board that hasn’t benefited from the presence and service of Roy Krege. In addition to his more formal commitments, he has always been in high demand as an emcee, an auctioneer, and a speaker. Hundreds of thousands of dollars have been raised over the years for charitable causes at the drop of Roy’s auctioneer hammer! From selling cakes to raise funds for Banner Elk Elementary School, pies for the fire department, or a Cadillac for the Lees-McRae scholarship fund, Roy’s excitement encouraged supporters to give generously.

Anyone who shares Roy’s journey, even for a short time, gets caught up in his enthusiasm for life. Just as Roy says “yes” to almost every request for his help, he inspires people to follow his lead and say “yes” without even knowing the question. If Roy is involved, it is almost certainly going to be fun and for a good cause. The projects and programs Roy has started and facilitated over his lifetime are too numerous to mention, but here are several: Lees-McRae’s Alumni Frolic, Elderhostel, Alumni Arts and Crafts Fair, FORUM, Presbyterian Family Week, Banner Elk’s Concerts in the Park, the Woolly Worm Festival, Fourth of July Parade and Festivities, art shows for scholarships… and the list continues. Roy has supported the angel tree program, Reaching Avery Ministries, Yellow Mountain Enterprises, Grandfather Mountain Highland Games, and has answered the call of every school, church, and organization who needed a hand. As the longest-serving member of the Banner Elk Kiwanis Club, Roy has helped with every Club project and swept others along for the ride! Even in retirement, Roy and Marion continue to serve others through community activities, including LMC’s Summer Theatre.

Roy and Marion’s belief that God calls us all to serve has also been put into action for decades at Mount Calvary Baptist Church. From church suppers and after-prom breakfasts to youth groups and holiday celebrations, they have brought people together in faith and fellowship.

Over the years, many people have thought Roy was mayor of Banner Elk. Described as affable, indefatigable and ubiquitous, Roy was everywhere—picking up litter, posting signs, smiling a welcome. Roy has always created a sense of home wherever he is and welcomes everyone. Whether entertaining people for a meal in his home, teaching a group of people to square dance or do the bunny hop and hokey pokey, spreading love through baked goods, or coming to a full stop to sit with someone who just needs a bit of undivided attention, Roy has always had a gift for making people feel like a part of his family, the college family, the human family.

Throughout his life, Roy has been a featured speaker at countless banquets, church services, and programs. One of the favorite things he’s shared over the years is a song called NO CHARGE. The song, written by Harlan Howard and first recorded by Melba Montgomery, tells the story of a little boy who brings his mother a list of what he is owed for each chore and accomplishment. After his mother reads his list, she makes her own list of concrete examples of how she has loved her son through the years. She adds it all up and says that the cost of her love is “no charge.” Throughout Roy’s life, he has given us his very best—his love, his expertise, his humor, his service, his leadership—at NO CHARGE. And the value to all who’ve been a part of Roy’s journey? PRICELESS!

In a gathering to celebrate his 80th birthday earlier this year, here’s what a few people had to say about Roy Krege:

“Roy and Marion have always been my second set of parents. I was their practice child.”  – Mark Evans, son of Barbara and Dr. H.C. Evans, Jr.

“We can always count on each other.”  – Robin  and Gary Long, lifelong friends (Robin was Roy’s first date – a hay ride in 9th grade. Gary and Roy served as each other’s best man at their weddings.)

“The college seal at Carson-Newman features a torch that provided the spark in Roy‘s career that burst into a blaze when he and Marion moved their family to Banner Elk. We believe in divine intervention, and this is one of the best examples we will ever find.  – Doug Moody, classmate and lifelong friend

“Psalm 100:2 says, ‘Serve the Lord with gladness.’ Our motto at Mt. Calvary Baptist Church is paraphrased, ‘ Love God, love people, and do something about it!’  As a servant-leader, this is how Daddy has lived his life.” – Dewayne Krege, son

“All I know I learnt from [Roy] Krege!” – Dr. Janet Barton Speer and Jarrett Koski-Kohler, friends and colleagues, from a song and dance tribute inspired by MATILDA’S “Telly”

“[At the Woolly Worm Festival] Roy didn’t dress up on stage for any recognition, didn’t care if he got his picture in the newspaper. He did it to make sure that everyone in attendance be it vendors, volunteers and especially attendees young to old had an amazing experience and left the festival with a smile.  And all I am trying to do in my role is continue his amazing legacy.” – Adam Binder, Mr. Woolly Worm II

“Ponder a moment and think about how you have been blessed through knowing this man.  How has Roy Krege impacted you? For me…Roy has cared for me and shown his love for me over forty years…He has shown me how to care for an entire community.”- Jim Swinkola, friend and colleague

“Roy has been totally committed to Lees-McRae, this community, his church and his family.  I am proud to call him my true friend.” – Jim Stonesifer, friend and colleague

“Thank you…for being the model for how we all should live lives in dedication to others.” – Lee King, President, Lees-McRae College